Been a while since we have posted some updates so going to put some group posts up just highlighting some animals we have taken recently. First group up is Blackbuck Antelope. We still have some really nice ones available to hunt. Anyone looking for a nice one give us a call and inquire on our summer special blackbuck are on the list. 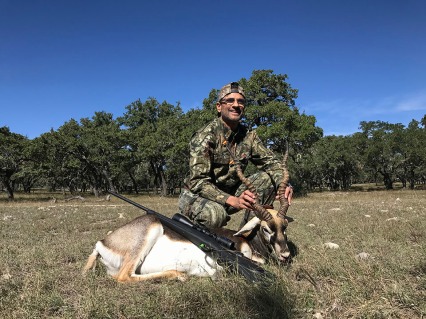 A good friend and hunting client Doug had been wanting a giant Sika deer for a long time. He can check that one off the list! Doug wasn’t interested in the typical Japanese Sika and I had told him to hold off and let some of our Dybowski get bigger well looks like that waiting paid off big time. Preliminary measurements have Doug’s Trophy Dybowski Sika measuring in the top 10 for Trophy Game Records. Congrats Doug on a great Dybowski Sika buck!

Cam Pics! Going to be a good year!

Here are a few game cam pics of some animals here at Forister Exotics( all of these pics are this years animals time stamps may not be set correct on all the cams!), Some of you are already booked to come take a crack at outsmarting some of these trophies….the rest of you whats your hold up!! Call today and lets get you on the calendar. Also check us out on facebook! 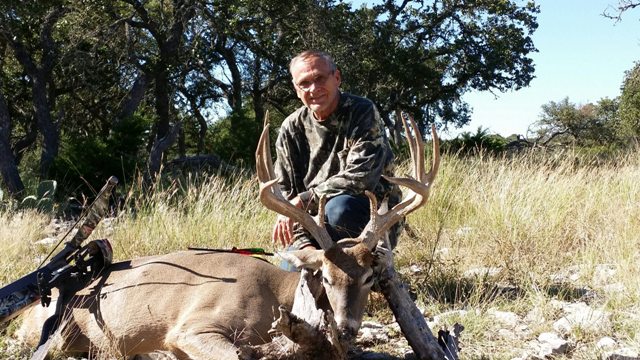 Well the first weekend of archery whitetail season came and went without much excitement on the whitetail end of things but we finished the 2nd weekend with some excitement. Doug brought his father Louis out for a good whitetail and I think we got a good one. The hunting was really slow and being a bow hunt we didn’t have a lot of options. Doug and Louis sat over a feeder in a popup blind for 2 days seeing tons of deer at one point they had 28 deer in front of them but mostly young deer and doe and a few exotics. Each sit we did something a little different either by adjusting the feed time, run time, corn with the truck, corn without the truck, just trying to coax one of the bigger bucks to make a mistake and come in. The second morning they thought one of the big boys came in and fed before daylight but before it got to legal light he was gone. So after the last morning hunt I asked Doug what he though if maybe we tried to make a couple pushes just to see if we could locate one of the bigger whitetail deer and maybe just maybe make a play on him. Doug and Louis  agreed it might be worth a shot. Well first pass 2 big deer slipped pass out of range so we decided to try again in another spot. Once they got set up I left and got around the pasture to try to push again and I saw a group of good whitetail bucks. I knew it was about to get interesting. I started slowly trying to get them to cooperate and go the right direction. Once I felt they where and would come out to the right opening I proceeded to push them. They got around and came right across in front of Louis and after looking them over he decided this buck was his best shot being closest to him and having a few of the deer already down wind of them he knew they would probably spook very soon. So once he settled the crossbow and got the deer in his sights he let one fly and drove it into the Whitetail bucks shoulder. From where I was I heard the shot and the impact and I thought it sounded good so I made my way up to where they where set up. Doug was congratulating his dad so I knew it must have been a good shot. After a short track job we found this great whitetail buck at the end of the blood trail. All that was left to do was get some pics of the happy hunter and get him to the skinning pole. The deer scored right at the B&C line 172″ Congrats Louis on a whitetail buck of a lifetime!! 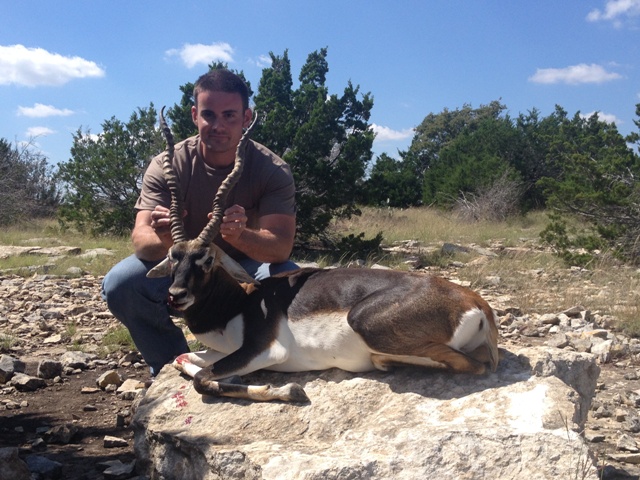 Doug had a couple of his clients out at the ranch yesterday in search of an Exotic. With multiple animals on the menu we decided to hunt Safari style and just see how it played out. We Looked at some good Mouflon Rams and passed on them and saw some excellent Axis bucks that we just never could get a shot at. After lunch we decided to go back and look for one of the Blackbuck we had see earlier in the day. After looking at him closely we decided to take him. Well you know how that goes about the time you decide to shoot everything runs off! So we tried to keep up with him and eventually lost track of him. As we approached a big clearing where the road forked we noticed a few Blackbuck females crossing and so we figured the buck had to be close. We moved in to get a close look and as we did we found the Blackbuck we were after fighting another male 50 yards in the brush. We waited a few seconds for them to move into a clearing and Eric made a heck of a shot free handed and dropped the Blackbuck in his tracks. Great Job Eric and Congrats on your first Exotic Trophy.