First I would like to thank Dave and Dan from  New Mexico for coming down and hunting with Forister Exotics. They got to the ranch Thursday night and the plan was to hunt Friday and Saturday. We discussed a game plan to go to the ranch in Real county to start with to look at an Addax, the big Elk, maybe a red sheep and an axis buck would not be passed if the opportunity presented itself. We woke Friday to extremely nice weather calm winds and overcast skies mid 60’s temps. Wow is this mid July in Texas? As the day went on it never got over 85 degrees and was pleasant most of the day. We left the lodge about 5:45 and made the short ride over to the other ranch. I was hoping to find the Addax Bull quickly and see if Dave was going to be happy with him and once we found him it didn’t take long for Dave to make his mind up and make a quick stalk on him. Dave made a good shot and we were standing over a nice Addax Bull prepping for pictures.

After a quick stop at the skinning pole we were back out driving looking for the Red Sheep originally but we came down a hill and jumped this nice Axis buck. Dan was quick to get the rifle on him and get a shot. So there was a major bullet problem here with this deer and after Dan finished him off we took some pictures and got him gutted.

Dan was shooting a STW armed with a berger bullet be aware this bullet did not do the job as advertised. The bullet blew up on entry and did not penetrate at all. Man we all felt bad watching this Axis buck expire and wondered what went wrong. Once we got his guts out we found out the bullet did not perform so Dan thought best to head back to the main ranch and get his other rifle loaded with a different bullet and try to round-up some lunch. After a quick bite we decided to go look at the Mouflon in the main pasture. We came across a big group of Mouflon rams after a few laps and Dan decided the leader of the pack was the one he wanted. As we tried to get a range on the herd Dan knew the big one he wanted was about to hit the brush and made a great 200 yard shot. We marked the spot visually and made our way over to find him.

What a beautiful Mouflon. Again we made our way over to take some pictures and to the skinning pole. Once we were done we decided to run in and find something for dinner. After dinner we had time for another ride through the main ranch and Dave would like to shoot a good Axis buck if we could find one. After seeing a few good ones this nice buck stood still long enough for Dave to decide he wanted him and get a shot. After the shot it quickly got dark and we were having trouble finding blood. We kept looking and after a few minutes I rounded a corner of brush and shined the light and low and behold there was Dave’s Axis buck tucked away in a clump of trees. Since it was dark we figured we would get him gutted and posed in the walk in cooler so we could take some pics in the morning. What a fun Friday of hunting! Dave and Dan are 2 great guys from Clovis NM and if you are ever in Clovis stop in DC Tactical (Dan’s gun shop.) Thanks again guys we hunted hard but got it done and had a good time to boot. Looking forward to having Dave back in November for an Elk hunt and Dan wants to come back and shoot a good Fallow. Can’t wait!! 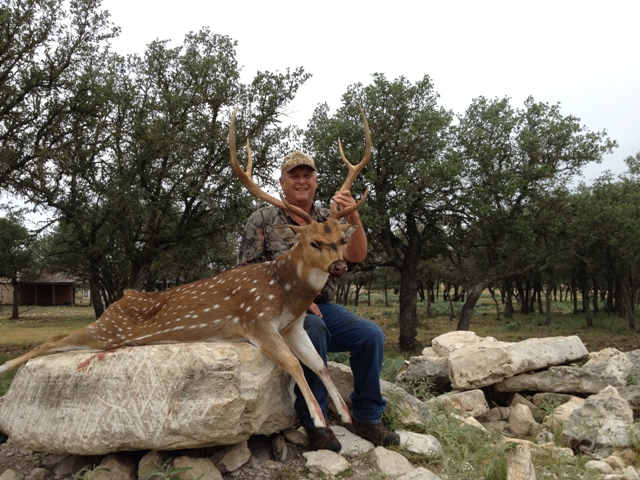