Rattlers Moving Before the Heat!!

Went to the barn this morning to get some feed, as soon as I touched the gate I could hear him rattling somewhere in the barn!! I approached with caution..as loud as it was it had to be right there close to the gate I thought. As I instructed my 6 year old son to stay in the truck I began to investigate. With the barn being pretty open with just a tractor sitting on one side I could not find the snake. Finally I could hear him again and I could see the peacocks out under the overhang of the barn going nuts! I looked through a small gap in the tin and there he was outside the barn. This was the loudest rattle snake I have ever heard. I saw my right hand man Valdo coming through the pasture headed for the skinning shed and I motioned for him to come over knowing he had a snake charmer ( .410 shotgun) in the truck and I couldn’t find a 22 bullet to save my life! By the time Valdo made his way up the snake had gone under our hay stack. I went back to loading feed and I told my son to remain in the truck for safety. Valdo proceeded back to the skinning shed to spray down the cooler from the weekend of hunting. Once I was done I told myself he is probably gone but when I looked back through the crack he was back out. This time he did not rattle at all. Valdo was on his way back help load feed and I motioned for him to bring the gun. Valdo quickly loaded the gun and came into the barn where we laid eyes on the snake again this time he would not escape. Valdo quickly scaled up to the overlook and I handed the gun up and he fired. I looked back through the hole and I knew he had finished him off. We made our way outside to see the snake. When we got to him we thought it was a rat or something but it turned out to be a half grown squirrel in the snakes throat! We snapped a few pics and I skinned him. The snakes are moving in the cool hours before the heat hits and in the evening when it cools down a little. This snake measured right at 4 feet and had 10 rattles and a button.  Be safe and watch your step!! 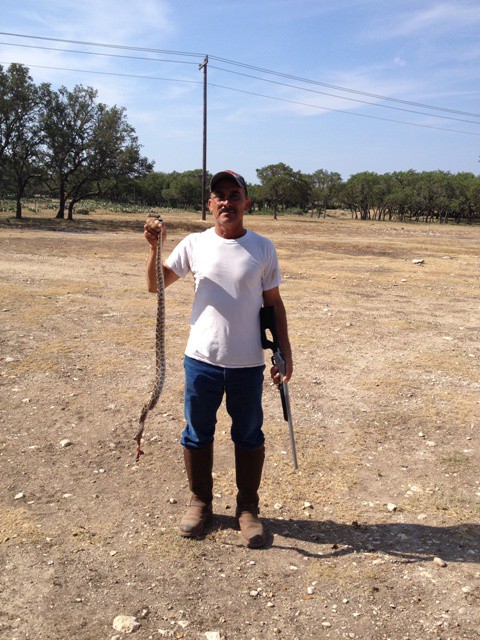